I made this cinnamon roll-ups on Christmas Eve morning. It was lovely to have an extra day off before Christmas to prepare. My mom was famous for this recipe. The copy of it in my recipe box is in her handwriting on a slip of paper. At the top of the recipe she’s written “AT LAST!” because she had given the recipe to a friend of hers and that friend taped that slip of paper to a recipe card with a note that says “From your mom. I asked for this recipe several times, that’s why AT LAST.” That slip of paper is precious to me.

When I was a teenager my mom used to wake up early to make these so we could grab one for breakfast on the way to the bus. We also had a college student boarding with us at the time. He loved these cinnamon roll-ups. Several times he even made them himself. It just happened to be late at night which drove my mom crazy. He would always leave the dirty dishes and a pile of flour on the counter which my mom would find in the morning.  So, I’m saying this recipe is easy enough even for a college freshman to make.

Preheat oven to 400 degrees F. Combine flour, sugar, baking powder and butter together until crumbly. Beat together the egg and the milk and add to the flour mixture. Roll out in a rectangle about 6″ x 18″.

Spread dough with butter. Sprinkle with brown sugar and cinnamon. 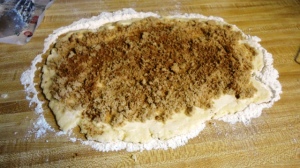 Roll up the dough length-wise pressing to seal the edges. 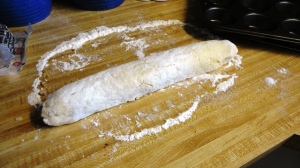 Cut into 1-inch sections, 12 in total and place into an ungreased muffin tin. 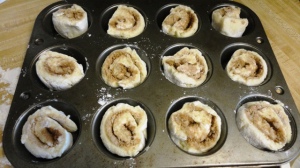 Don’t forget to check out My Favorite Things of 2010 and enter the giveaway for a subscription to Everyday Food.