This recipe was inspired by Michelle at One Ordinary Day. I’ve made this for dinner several times since my first attempt. I actually bribed the kids to try the meat by promising them some root beer to drink if they did. They didn’t like it but that’s okay. All I want them to do is try new things. They aren’t going to like everything. The last time I made these I had run out of bottled barbecue sauce so I threw some together and I was very pleased with the results.

(adapted from One Ordinary Day)

For the barbecue sauce:

Trim the pork tenderloin and cut into 2-inch pieces. Place pork in a medium saucepan and pour root beer over it. Bring to boil over medium-high heat; then reduce to low and simmer for 20-30 minutes or until meat is cooked throughout. 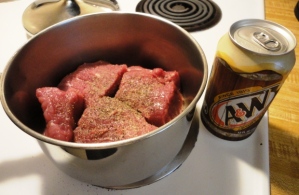 Once the meat is cooked remove from the pan and shred with two forks. Discard the root beer and place the shredded pork into the barbecue sauce stirring to coat the meat thoroughly. 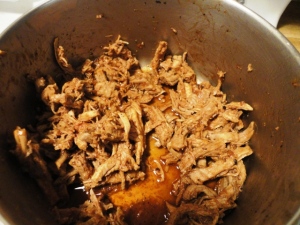 Serve meat heaped on a toasted bun. Makes 4 sandwiches. Check out Michelle’s recipe for broccoli slaw that goes well with these sandwiches.