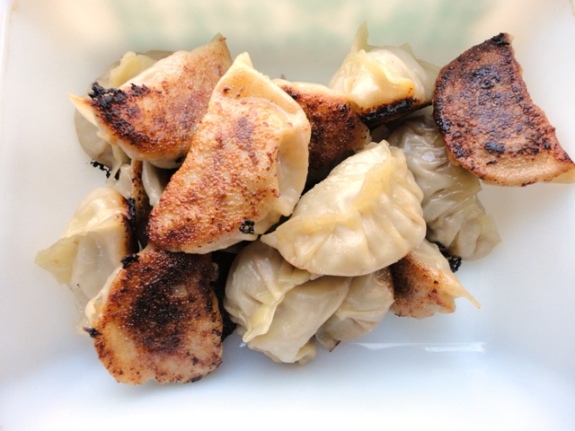 Chinese dumplings are something I’ve been wanting to make for over a year. I had a recipe torn from the February 2010 issue of Family Fun magazine. That same issue also had a recipe from Nancy McDermott for scallion pancakes. I was inspired to order Nancy’s cookbook called “Quick & Easy Chinese” because of those scallion pancakes. This weekend I finally got around to making Chinese dumplings but I used the recipe from the cookbook instead. I was hoping that I could get the whole family involved in the folding of the dumplings but they ended up getting wrapped up watching a movie so I ended up making them on my own. It was fun but a little time consuming. Save this recipe for a day when you’ve got about 90 minutes available to prepare your dinner.

My daughter asked to have her dumpling made with only baby corn but then changed her mind about the dumplings altogether. My son asked for a dumpling but after he saw it on his plate also decided not to try it. I even told them that they would be allowed to use their chopsticks to eat if they tried the dumplings. No dice.

In a large bowl combine all ingredients except the wonton wrappers and the vegetable oil. Combine until evenly mixed in. Set up a work station with a dry cutting board, a small bowl of water for sealing the dumplings, the stack of wonton wrappers, and the pork mixture. I also kept a paper towel handy to dry off the cutting board in between folding each dumpling. 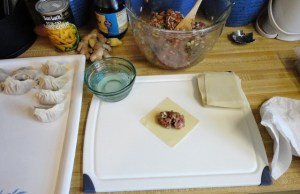 To shape a dumpling, place a wonton wrapper on the cutting board. Scoop up a generous tablespoon of pork filling and place it in the center of the wrapper. Dip your index finger into the bowl of water, then lightly moisten the outside edge of the wrapper. Fold it in half making a triangle, enclosing the filling and pinching the top edges to make a tight seal. Try to squeeze out any air bubbles that may form. Create 3 small pleats one one side of the seal, folding toward the center and pressing to seal it well. Form 3 small pleats on the other side and press the entire sealed edge. Place on a dry baking sheet or tray and press the sealed edge down lightly to plump up the dumpling and make it stand straight. 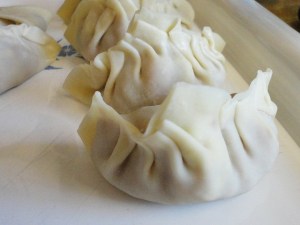 Continue folding dumplings in this way, one at time, or setting up 3 or 4 wrappers at a time for an assembly line. Place the folded dumpling on the tray so that they don’t touch each other. 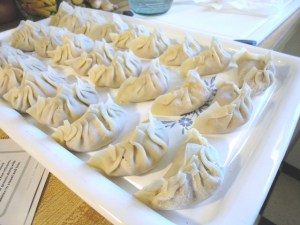 To cook the pot stickers, heat a 10-inch nonstick skillet over medium high heat and then add the vegetable oil and swirl to coat the pan. Carefully place about 12 pot stickers in the pan, tucking them to form a circle in one direction; squeeze a few in the center if you can. (Packing them tightly is fine.) 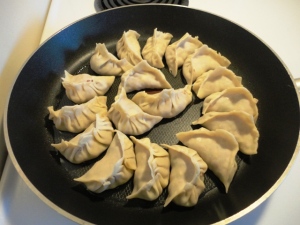 Let them cook undisturbed for 1 to 2 minutes, until the bottoms of the dumplings are a pale golden brown.  Holding the skillet’s lid in one hand, add 1/2 cup water around the sides of the pan and then cover quickly. Let the pot stickers cook for 8 minutes, and then uncover the pan. 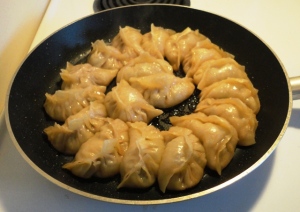 Continue cooking 1 to 2 minutes more, shaking the pan gently and using a spatula to discourage the pot stickers from sticking too much. When the water has evaporated and the dumplings are crispy and brown, turn them out onto a serving platter. Repeat the cooking process with the remaining folded dumplings. Serve hot or warm, accompanied by Ginger-Soy Dipping Sauce. 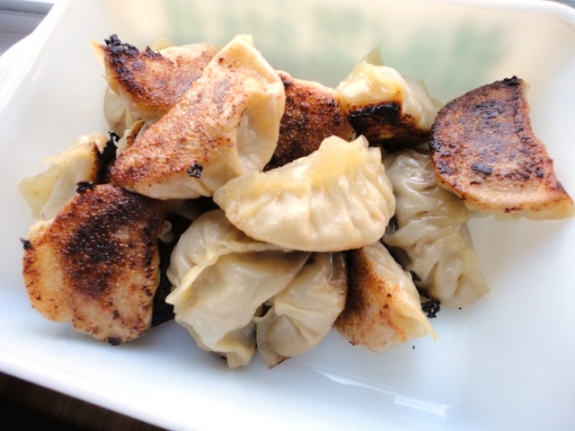 My husband and I both enjoyed this dinner. His comment was that they were not exactly like take-out but that they were very good. Our rating for this recipe is