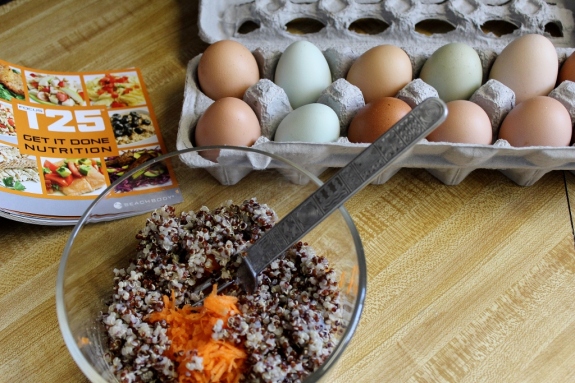 I’ve started an exercise regime called Focus T25 this past week. I’m blaming peer pressure on this one because nearly everyone in my department at work is doing the same program. So far I am amazed with the results. It’s a tough 25 minutes each morning but it’s only 25 minutes so it’s over quickly. I’m told that this week I’ll feel like the workouts are easier and I’m definitely looking forward to that. I’m not aiming to lose weight but rather to get strong. That’s one of my core desired feelings.

Part of the regime involves a change to your diet which I am whole heartedly behind except for the Shakeology shakes that they recommend. I just want to eat healthier and this recipe gives you nutrition and delicious taste at the same time. It’s been adapted from the Focus T25 Get It Done Nutrition cookbook that ships along with the program.

Mix together all the ingredients in a medium bowl and allow to sit for 5 minutes. Heat a non-stick pan sprayed with cooking spray over medium heat. (I used a pan that had a little bacon grease in it from cooking up some bacon ‘cuz I’m a rebel like that.) Divide the quinoa mixture into fourths and press into patties, placing into the hot pan. Cook each side approximately 2 minutes until cooked throughout.  Serve 2 patties on a bed of fresh baby spinach and dress with a lemon & olive oil dressing. Save 2 patties for lunch the next day. 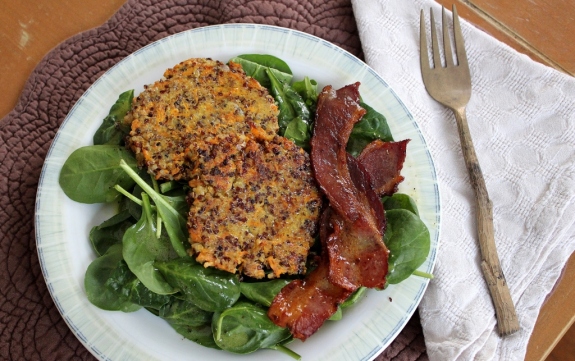 The results are a tangy, spicy, satisfying lunch that contains a complete protein. I added a couple of slices of bacon because I never say no to bacon.