Is it a brownie? Is it a pie? Is it candy? It’s all of that rolled into one. The photos of these delicious treats were so frickin’ adorable that I found myself hoarding the mellow crème pumpkins so I could make them. I completed a test run of the recipe this weekend in preparation for our neighborhood Halloween party next weekend. Pumpkins will continue to be hoarded until after Halloween. It just occurred to me that these would be a fantastic addition to Thanksgiving. Must buy all the pumpkins now.

Of course I found these on Pinterest but Dorothy from Crazy for Crust is the genius who came up with this concoction. If you need some dessert inspiration, that’s the blog to check out.

Preheat oven to 350° F. Grease a mini-muffin tin then press 2 1/2-inch cut circles of pie crust into the tin. Fill each pie crust with a heaping teaspoon of brownie batter. Bake for approximately 15 minutes, remove from oven and press a pumpkin into the top of each brownie. Allow to cool in muffin tin, remove by gently running a butter knife around the edge of each mini-pie. 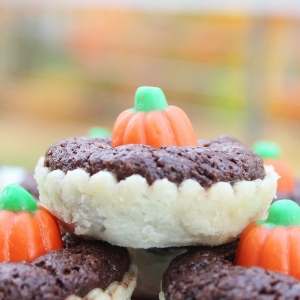 I couldn’t have been happier with the results. The neighborhood kids and my kids were my taste-testers and they all gave me two thumbs up. Husband, being the pessimist that he is, said it doesn’t matter if these taste good because they look so good that everyone will take one. I’m choosing to take that as a compliment, thank you very much. 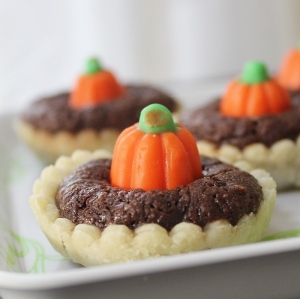 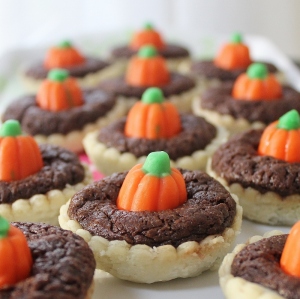