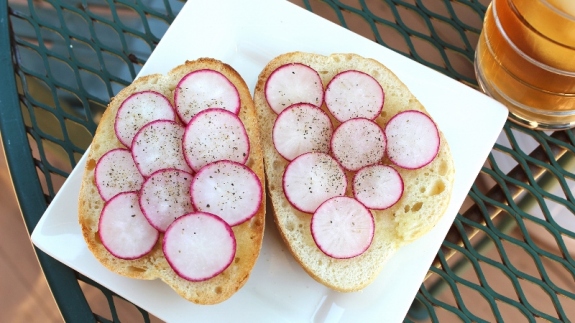 This recipe was inspired by the July 2015 issue of Cooking Light. Their version contains additional ingredients and is most definitely something you’d want to serve to guests at a fancy brunch. My version was born out of my realization that I had a couple of extra crusty rolls, several radishes in the fridge and the Cooking Light recipe floating around the counter after having torn it out of the magazine. It’s simply wonderful despite missing the black olives and fresh herbs that the original version contained. In fact, I liked it so much that I ate radish tartines for three meals in a row.

It’s a refreshing change for a hot summer day when you don’t feel like cooking.

Toast the roll until golden brown. Spread butter over the roll and then top with radish slices. Season to taste with salt and pepper. Eat immediately. 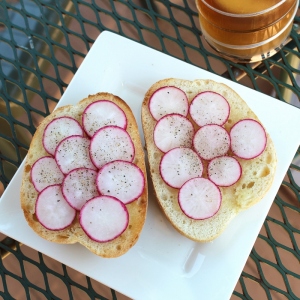 It really could not be simpler. This has replaced my regular summer obsession of toasted tomato sandwiches.