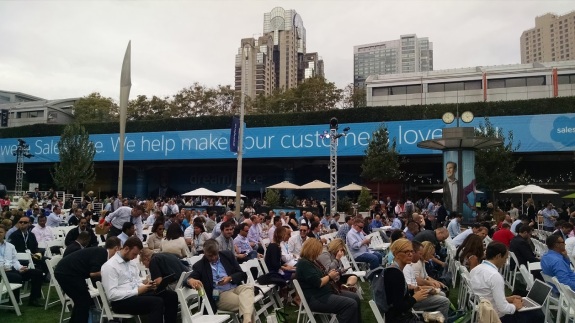 This is a departure from my regular topics but since I’ve returned from Dreamforce 15 in San Francisco, I’ve had this niggling at the back of my brain. I was impressed with Dreamforce. It’s an undertaking that you can’t quite understand unless you experience it and this year was the biggest turn out ever. Never did I think that I would enjoy a conference with 170,000 people in attendance but I did. I left feeling inspired, transformed and am already planning to attend in 2016. A friend commented to me, “So you’ve been inducted into the Salesforce cult?” And it feels a little like that.

My favorite sessions were the ones in the Women’s Leadership Summit, which were excellent yet I believe that an opportunity was missed.

I’m thrilled that Salesforce.com has decided to embrace equality but it felt like you were taking credit for the courage and initiative that Leyla and Cindy had in bringing up the topic. I am fairly certain that you don’t fully understand the issue. Until you walk a mile in our high heels, you can’t know how it feels to have your ideas diminished in a meeting, your presence dismissed, or your ambitions deterred because of your gender.

Your efforts mean huge progress but I would have crafted your message as follows:

As the CEO of the 4th largest software company in the world, I recognize that I’ve got a certain amount of influence. I applaud and celebrate the efforts of our female leaders to bring this issue to light. As a leader and influencer, I embrace women’s equality as a key transformative initiative at Salesforce. That’s why we are focused on this topic today. I’m here to challenge other tech companies to follow our lead. Don’t do it because it will bolster your business but because it’s the right thing to do.

Then I would have liked to learn about how Leyla and Cindy presented their case to you. How do other women raise the issue at their own companies? How do you gain awareness even if you don’t have access to 1×1’s with the CEO? This is a revolution and in general revolutions start from the bottom up but when a leader joins a revolution then it can gain momentum much faster. I agree that CEO involvement is key. Your example can change a lot of minds but the revolution starts with women speaking up.

I’d also want to know how Salesforce plans to measure progress now and in the future.

I’m looking forward to the Women’s Leadership Summit in 2016. Women’s equality is a battle that deserves everyone’s attention. See you next year.